Much is made of the letter left by Liam Byrne, chief secretary to the Treasury in 2010 saying “I’m afraid there is no money”. It was a poor joke.
Since the setting up of the equivalent of the Bank of England just before 1700 there has never been any money in the kitty, the country has always been in debt and it was near its lowest during the Labour administration and so provides no evidence for ‘Labour Profligacy’. 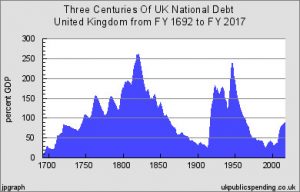 (Note: these figures are % GDP so they reflect the ability of the country to pay them)

Post crisis the debt increased as the government bailed out the banks and paid out unemployment and other benefits. The way the Conservatives blame Labour for the increase in the debt after the crisis suggests they would have let the banks go under and the 1000’s of dependent businesses with them. There is of course no chance they would have done that. 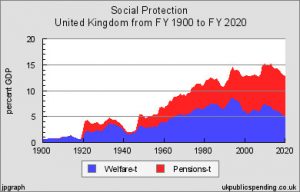